With the media in TV and newspapers, not to mention on social networking, neglecting to tell the whole story about the Trade Union Bill: members of the public and trade union members too, can be forgiven for asking "Just what are the issues and why should I be concerned".

Here the TUC briefing document explains why the Trade Union Bill currently going through the House of Lords will have such a detrimental affect upon democracy and worker’s rights in this country that it will take us back to the 1700s when worker’s rights did not exist.

At the end of this page you will see links to downloading the Trade Union Bill and read it for yourself.

The main areas of serious concern are discussed below: 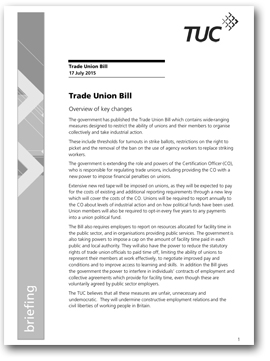 The government plans to allow agency workers to replace striking workers. And by requiring 14 days’ notice of strike action (rather than 7 as at present), employers will have more time to arrange agency workers to cover for strikes. This has been banned in the UK since 1973.

Unions will have to appoint picket supervisors. They will be required to carry a letter of authorisation which must be presented upon request to the police or “to any other person who reasonably asks to see it”. The supervisor’s details must be given to the police and they must be identifiable by an armband or badge.
Failure to comply could result in a court injunction to stop the picket, or thousands of pounds of damages for the union. Local authorities could also have the right to issue anti-social behaviour orders to picket line participants or protesters.

In ‘important public services’ (fire, health, education, transport, border security and nuclear decommissioning), 50% of members must turn out to vote and 40% of the entire membership must vote in favour (that amounts to 80% of those voting, on a 50% turnout).
The government argues these thresholds are aimed at boosting democracy in the workplace.

The Certification Officer (who regulates unions) will be given powers to investigate unions and access membership lists even if no-one has complained about a union’s activities. The regulator will also be able to impose fines of up to £20,000 on unions. The government will be able to charge unions to cover the running costs of the Certification Officer. Costs are likely to increase as the regulator has new responsibilities.

All public sector employers will have to publish information on the cost of time off for union reps, plus a breakdown of what facility time is used for – collective bargaining, representing members in grievances or disciplinary action, or running training programmes.

Public sector employers won’t be able to offer the option of paying for union membership direct through salaries anymore (“check-off”).

The government will be able to cap the time public sector employers allow union reps to spend representing members.

Be under no illusion, even those changes which apply only initially to the public sector workers and their Trade Unions; they will soon be introduced by the private sector employers too!

The CWU is fully supporting the TUC week and in particular the day of events planned for 11th February at workplaces around the country.

CWU branches and members are being asked to really focus efforts
through organised workplace protests.

This day is about CWU members showing everybody that you are proud to be a member of our union.

Regions are being asked to organise leafleting at mainline train stations on the day to further highlight the roles
that unions play in society.

We would like CWU branches and members across the UK to take selfies and workplace photos using the
poster on the other side of the membership communication that we will be sending to all home addresses.

Download the CWU briefing on the Trade Union Bill here