Thousands of Post Office staff will walk out on strike on 31 October 2016 in a dispute over jobs, pensions and closures. 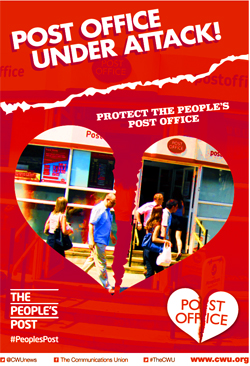 This will be the second day of strike action by Communication Workers Union members in a dispute over job losses, the closure of the DB pension scheme, and the closure and privatisation of Crown post offices.

The union is not ruling out further action in the run-up to Christmas.

The dispute affects 3,500 Post Office staff working in Crown post offices, admin and supply chain roles across the UK. Strike action was strongly supported on 15 September and CWU members were joined by Post Office managers who are members of Unite.

‎Three meetings have taken place at ACAS but no meaningful progress was made, with the Post Office unwilling to move on any of the key issues.

“The stakes have never been higher for the future of the Post Office, its workers and the communities they serve. The Post Office is at crisis point and the management and government need to listen to the workforce.

Staff and the public are seeing little more than a glorified closure programme from the Post Office and it cannot survive by simply cutting costs. We are calling for the government as the owner of the Post Office to step in, halt the cuts and work with us to develop a proper strategy that will secure the future of the service.”