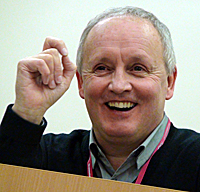 Painting a picture of the reality that faces the public and especially those who have retired, CWU’s Tony Kearns made it clear when speaking on Motion 7 at the Retired Members Conference this month; that pensioners need now to fight back against a Tory Government that is hell bent upon demolishing not only the triple lock currently protecting pensions and pensioner’s support such as free prescription, free bus passes, and fuel allowances; along with the state pension itself!

Following a heavilly charged debate on Motion 7, the first part of his speech dealt with the issues of the future of retired members in the Union.

In the second part of his 15 minute speech he attacked the Tories, saying:

"This mob that we’ve got in now will make what Thatcher did to this country, to the working class of this country look like the magic roundabout. Make no mistake about it!"

You can watch Tony’s speech below: