In an unprecedented move that the majority of the public are unaware of, Theresa May via a motion from Commons Leader Andrea Leadsom has succeeded in ensuring that despite the general election loss of her government majority, all public bill committees will command a majority of Tory members!

The bill committees are the back-bone of ALL LAW MAKING in Parliament and as a result of this unprecedented change of procedure, the Government will be able to get through all the public Bills they wish to by virtue of a majority on these committees which goes against all previous arrangements since 1995 where public bill committees reflected the House of Commons majority. 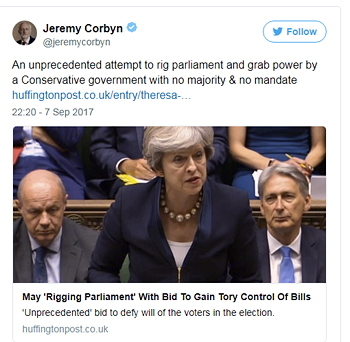 The motion makes sure that “where a committee has an odd number of members, the government shall have a majority.” They then ensure this to be the case for ALL committees!

In 1995 a motion by the then Commons Leader Tony Newton was passed that has remained adhered to until now. His  motion guaranteed a majority on committees only as long as a Government had a majority of the whole House of Commons.

Despite the vast majority of opposition MPs of all parties voting against the plans and attempts to amend the motion by the Greens and Lib Dems, it was passed by 320 votes to 301.

This means that the Government now has the power to dominate every bill committee from now until 2022 and push through bills that the country never gave her the authority to do so in the  June 2017 general election.

Andrea Leadsom’s motion rigs the little known but very powerful Committee Of Selection which chooses which MPs go on select committees that scrutinise policy and ministers, and standing committees that govern legislation.

Her motion rigs the Committee with nine members, but specifies that there will be five Tory members.

This is despite Commons officials allocating four members each for Labour and Conservatives and one SNP member – in line with the June election result.

The Tories under Theresa May are acting with total contempt for democracy and are happy to ‘rig’ Parliamentary procedures in defiance of the electorate’s will as determined in the general election.

This will in effect allow them to strip workers rights legislation, abolish the Human Rights Act and force through other Dickensian legislation against Trade Unions, food safety standards and health and safety at work legislation. 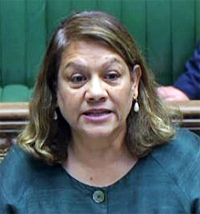 Shadow Leader of the House, Valerie Vaz is quoted in the HuffPost UK as saying on the 8th September prior to the vote on the move:

“This is an unprecedented power grab by a minority government that lost its moral authority as well as its majority at the General Election.

On Monday the Government are seeking the power to change the law by ministerial edict and on Tuesday they will try to sideline opposition in Parliament by rigging the committee system so that they are guaranteed a majority they didn’t secure at the ballot box.

The British people will not understand how having voted to deny the Conservatives a majority, the Tories can alter the rules of Parliament to ensure they have one."

She concluded by saying:

“The very people who told us Brexit was about restoring Parliamentary sovereignty are now voting through measures that will sideline Parliament and grant Ministers unprecedented powers.”

Whilst this current rigging of committees will last only until 2022, it is clear that this mechanism of rigging Bill committees will continue to be attempted by the Tories whenever they loose their parliamentary majority!