Whilst the media misinforms the general public about just what the Trade Union Bill is all about, merely reporting that it is to regulate strike ballots, anyone listening or watching the House of Lords 2nd reading debate which started yesterday afternoon (11th January 2016) around 3:10pm and went on until after 11 pm; would have gleaned the facts about this anti-democratic and draconian Bill.

Following the long and detailed debate, the Lords voted without any dissent, for the Bill to be given a Second Reading and was subsequently passed into the Committee Stage.

Put simply, the Bill aims to curtail Trade union membership, rob the Labour Party to the tune of £6 million in funding via Trade Union membership payments into the political fund; and to minimise the effectiveness of Trade Union reps in the workplace.

The debate was characterised by the usual blind Tory hatred of Trade Unions and the deomonising them as being the ‘enemy within’ with even one Tory Lord demanding the end of the Human Rights Act at the same time as the passing of this Bill into law.

Responding to the Bill’s introduction by Tory Baroness Neville-Rolfe, The Parliamentary Under-Secretary of State for Business, Innovation and Skills, Labour’s Lord Mendelsohn led the opposition to this draconian and ‘spiteful’ Bill. The full debate can be watched below. Sorry for the sound in the beginning, this is due to the feed being from Parliament TV and not from this website:

You can download a full transcript of the debate by clicking on the Hansard cover pic below.

Here is a brief run-down of what the Trade Union Bill will do if and when it comes into law:

Public sector employers give paid time off to reps to carry out their union duties. A study by the University of Hertford in 2012 showed that for every £1 spent on facility time, between £2 and £5 is returned in accrued benefits on the costs of dismissal and exit rates; in other words trade union reps save the taxpayer money by resolving workplace disputes. 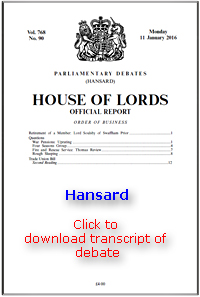 The government wants all public sector employers to publish the cost of time off for reps, plus a breakdown of what their time is used for. It also wants to cap the time
reps spend representing members, reducing unions’ ability to represent their members and resolve disputes before they escalate.

Union members have their subs automatically deducted from their salary at source. Despite many employers supporting check-off, the government wants to stop it, threatening the finances of unions.

The government claims it is unfair for the taxpayer to pay to collect union subs, but has turned down offers from unions to cover the costs themselves.

In “important public services” (fire, health, education, transport, border security and nuclear decommissioning), 50% of members must turn out to vote and40% of the entire membership must vote in favour of strike action (that amounts to 80% of those voting on a 50% turnout).

The government claims these thresholds are aimed at boosting democracy in the workplace but will not allow online voting. And why is the threshold higher for trade upon members than it is for MPs? The Conservatives formed a government after the last election despite winning fewer than 40% of the votes.

And half of the Cabinet did not pass the threshold of being elected by40% of the electorate.

The government plans to allow agency workers to replace striking workers, fundamentally undermining the power balance between workers and employers.

There are also concerns about inexperienced replacement workers taking on the roles of striking employers, leading to poorer quality services and, potentially, health and safety issues.

The government wants to give the Certification Officer the power to investigate unions in the absence of a complaint … and then send unions the bill! The Officer will also be allowed to confiscate copies of membership details.

See also: Opposition To The Trade Union Bill In The Lords Debate