As previously reported by this website, the government intends to turn the NHS into an American system of healthcare from April this year by using their Accountable Care Organisation system which will allow for the setting up of a two tier NHS.

Campaign groups are concerned that the contract, if implemented, would threaten patient safety and force hospitals and doctors to restrict treatment, making decisions based on money not clinical judgement. They believe that this new contract is unlawful under current NHS legislation.

National ‘grass-roots’campaign group 999 Call for the NHS1,4 has been given permission by a high court judge to bring a Judicial Review,5 of NHS England’s draft Accountable Care Organisation contract. 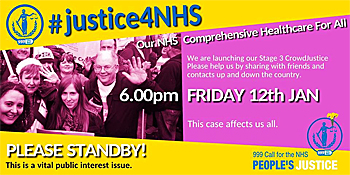 The group  has been actively campaigning since 2014 to restore the NHS as a properly funded, publicly owned, managed and provided comprehensive health service that is free at the point of need for everyone with a clinical need.

The Judicial Review is a direct challenge to NHS England’s introduction of a model contract for use by new local NHS and Social Care organisations, known as Accountable Care Organisations (ACO).

As previously reported, ACOs are based on the business model used by the USA’s Medicare/Medicaid system, which only provides state-funded “managed care” for the elderly and people who are too poor to pay for private health insurance.

“Managed care” involves a variety of mechanisms used by managers of American healthcare companies to get doctors to avoid expensive forms of treatment, and will introduce a two tier NHS for the first time in England.

In granting permission for the Judicial Review, the Judge commented that it would not consider the merits or demerits of the ACO model, but would focus on the lawfulness of the method for paying Accountable Care Organisations.

The group say that the current lack of a legal framework for Accountable Care Organisations – and in particular the way they would be paid to provide local NHS and social care services – is simply not compatible with democratic control and oversight of the resources and future of our biggest public service.

This is because the new ACO contract does not link payment to the number of patients treated and/or the complexity of the medical treatment they need, as required by the 2012 Health and Social Care Act,  but is based on a fixed budget for an area’s population.

This budget would be  geared to helping to meet the £22bn+ funding shortfall by 2021 that the government is imposing on the NHS in England.

The group believe this is not only unlawful under current NHS legislation, but would threaten patient safety standards and limit the range of available treatments.
The case will be held in Leeds High Court at some date after 16 February.

Recognising that it is in the public interest to establish if the Accountable Care Organisation contract is lawful or not, the Judge has awarded 999 Call for the NHS a capped costs order of £25K.

This limits the costs that the campaign group would have to pay NHS England, were they to lose the case.

999 Call for the NHS and internationally recognised public law firm Leigh Day are launching the third and final stage of their ‘crowdfund’ on 12 January, in order to cover all the costs of bringing the Judicial Review, and are appealing for £12,000.3

This amount, when added to existing funds donated by hundreds of generous members of the public in 2017, will cover the £37,000 cost of the Judicial Review.5

The link to crowdfund is: Crowd Justice Healthcare4All Stage 36

The organisation, 999 Call for the NHS, were originally well known as the Darlo Mums who organised a 300 mile Jarrow to London People’s March for the NHS in 2014. This culminated in a rally in Trafalgar Square attended by 20,000 people.

Jo Land, one of the original Darlo Mums who marched from Jarrow to London, said, 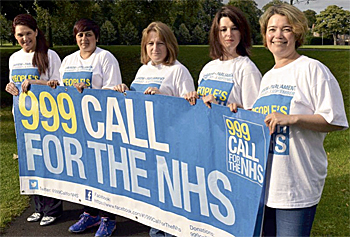 “In 2014, 20,000 people felt so strongly about the devastating effects of marketisation on the NHS that they joined us at the end of our 300 mile march to London to take a stand against it and spread the word.

Please join us again, in marching on the courts to challenge the Accountable Care Organisations contact.

This is a big step for us and we need your support. We believe it is vital to determine if the new contract is lawful or not. We all have to fight this together for the sake of the nation’s health and democracy.”

Defend Our NHS has existed for seven years. It was formed in January 2011 by a small group of people concerned about the changes to the NHS proposed by the then Tory Health Secretary Andrew Lansley. The warnings given by the Group’s founder members (who included Margaret Greenwood, now MP for Wirral West) about the likely damage to the NHS have sadly come true.

1. 999 Call for the NHS is a grassroots, volunteer-run campaign organisation. It has been actively campaigning since 2014 to restore the NHS as a properly funded, publicly owned, managed and provided comprehensive health service that is free at the point of need for everyone with a clinical need. www.999callfornhs.org.uk

2. Defend Our NHS was established in Wirral in 2011 and is also entirely volunteer-run. It has attracted a large and active group of supporters. As well as concerned local residents its supporters now include a significant and growing number of doctors and nurses, outraged by what is being done to the NHS. Its Facebook page is at https://www.facebook.com/groups/defendournhs/

Since 2011 the group has been active in informing the public about the growing local and national crisis in the NHS. It has a large mailing list and massive support for its Facebook page. Scores of people attend its public meetings and demonstrations.

In recent years Defend Our NHS in Wirral has:

* Joined the junior doctors on their picket lines as they campaigned for safe conditions for patients;

* Identified the now public crisis at Arrowe Park Hospital;
* Supported the community campaign to re-open the Eastham Walk-In Clinic;
* Revealed (in 2015) Wirral’s invitation to and involvement with Advocate Health Care, a US organisation well known for its ACO dealings; and now:

*
Exposed the secretive plans by the leaders of Wirral Council to defy their own party’s policy by implementing the STP/ACO.

3. From 6pm on 12th January, the crowdfund will be live at: Crowd Justice Healthcare4All Stage 3

4. As well as bringing this Judicial Review, 999 Call for the NHS – all unpaid volunteers – is also campaigning with other grassroots groups across England for the passage of the NHS Reinstatement Bill, the restoration of proper levels of NHS and social care funding and the protection of NHS healthcare for all – not the fragmentation and downgrade of our NHS to something resembling the USA’s Medicare.

5. A Judicial Review is a process of examining in court whether the government and/or its agencies are acting lawfully.

6. CrowdJustice is the only platform dedicated to raising funds and awareness for legal cases. CrowdJustice has established legal crowdfunding as a powerful tool for citizens to access justice and lawyers take cases that otherwise would not be heard. CrowdJustice is democratising the justice system by empowering people and communities to champion and build support for legal issues that matter to them. CrowdJustice has raised more than £4 million from over 100,000 backers to support legal action in the courts.