The TUC are asking Theresa May and her Government to commit publicly that they will not vote for any reduction in British workers’ rights, or restrict their applicability, when interpreting EU law into post-Brexit UK law.

Whilst it was clear via articles and statement sin the UK press by the likes of Priti Patel, Chris Grayling and Boris Johnson that employment laws and health and safety laws are ‘red tape’ ‘stifling’ British businesses; they denied any intention to cut such legislation when questioned on it during the EU Referendum debates.

Many vital rights at work in the UK are derived from EU law, guaranteeing things like paid leave entitlements, protections from being forced to work excessive hours, discrimination protections and rights for working mums to be.

This despite the inaccuracies of statements to the contrary by Gisele Stuart and Kate Hoey during their campaigning for Brexit. 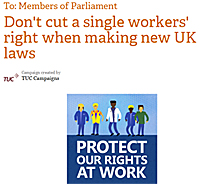 The TUC campaign page containing the petition to Theresa May which we are being urged to sign states:

‘Following the UK vote to leave the European Union, Parliament will decide what happens to these rights.

Prominent leave campaigners have called for a halving of regulations derived from EU law, or flexibility in interpreting rights, claiming that British business would benefit from a reduction in "red tape".

What they call "red tape" is really rights and protections that are valued by millions of working people. Attempts to cut these rights, or to limit the range of workers they apply to (for example exempting staff of small businesses or temporary workers), would cause great harm to fairness at work and to working people’s living standards.
Bad bosses would waste no time in taking advantage, and over time we would all lose, as business joins in a race to the bottom.

We need to keep a close focus on our MPs as they start to debate what happens to our rights at work, and hold them to account, whether they backed leave or remain.’
Once the petition has accrued the campaign’s target number of signatures, the TUC will send it to all MPs, highlighting the number who have signed in their constituency, as well as the total. Responses received will be published.