Whilst this headline may well be the opinion of those victims of the Grenfell Tower incident adding to the view that the victims were actually murdered as a result of mal-practice aimed at reducing costs of renovating the tower block, at the very least there stands a major conflict of interest with regard to the UK charity BRE which is doing the testing of the claddings across the country for the Government. 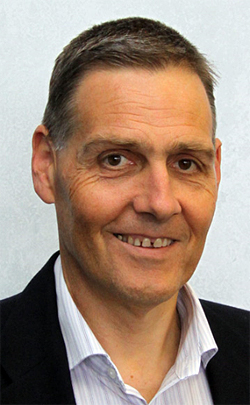 Professor Richard Hull, a chemistry and fire science expert from the University of Central Lancashire, accused the Building Research Establishment (BRE) of having an “unhealthy” mixture of commercial and advisory roles; following Sky News having established that the BRE wrote a report saying there was no case for regulating toxic smoke from plastic insulation.

Nothing worrying about that? Well there is when you consider that BRE wrote their report during the time they were being paid by plastic insulation companies.

Even more damning is the fact that at least three victims of the Grenfell Tower fire have been treated for cyanide poisoning as a result of the cladding immediately becoming an inferno.

As a result of BRE stating that there was no argument for regulating toxic smoke emissions, or on the volume of smoke produced by insulation or the danger it can pose; there are currently no regulations regarding the production of even cyanides and other death inducing gases!

In the case of the Grenfell Tower deaths, the insulation cladding fitted to the outside of the high rise residential block gave off highly toxic hydrogen cyanide gas which may have contributed to the deaths of some of the 79 confirmed victims.

This was confirmed by Fire Toxicity experts who told Sky News the insulation installed during a refurbishment of the tower produce the deadly gas when they burn, and their positioning meant every flat could have been filled with enough gas to kill those inside.

There are two types of cladding – Reynobond PE and Reynobond PR – the latter of which is dearer, but fire resistant for up to 2 hours according to the manufacturer. It consist of an inner layer of a mineral board with the outside made of Aluminium, which resist fire for, again up to 2 hours max.

Given that the contractors installing this cheap version of cladding, in doing a risk assessment to determine the suitability of the type of cladding used; must have known that on combustion that hydrogen cyanide gas is emitted by the panels.

This being the case, then the accusation of murder laid against all those involved in the refurbishment of the Tower, may well be justified. 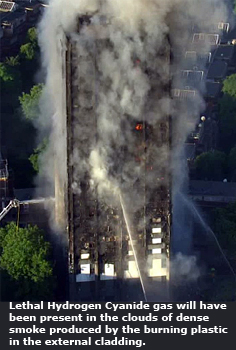 Media reports that at least three of those injured in the fire have been treated in hospital with the hydrogen cyanide antidote Cyanokitan, which is given only in the event of hydrogen cyanide poisoning.

The gas could have incapacitated even more residents; will do nothing to diminish the extent of the charges of criminality amongst those from the Kensington and Chelsea Tenants Management Organisation (KCTMO) to the contractors and sub-contractors involved.

However establishing the role of cyanide gas in the cause of death of the victims, may be nigh impossible because of the condition of the victims.

Richard Hull, professor of chemistry and fire science at the University of Central Lancashire, co-authored a peer-reviewed study in 2011 into the fire toxicity of six insulation materials which was published in the Energy & Building journal.

The study established that PIR was the most toxic.

The report also warned that while modern, lightweight building materials are cheaper to produce and offer improved thermal insulation, they pose a greater risk than traditional materials in the event of fire.

Sky News reported that Professor Hull told them that the gas produced by the insulation when it burned may have been deadly, quoting him as saying:

“The outside wall of the building had 150mm of PIR foam (fitted), and once the fire had spread to that every flat would have its own source of PIR foam, which would have produced enough hydrogen cyanide to kill all the people in that flat."

Adding that the warnings in his report should have been heeded, Professor Hull said:

“It’s been an accident waiting to happen and unfortunately we’ve got to the stage now where the accident has happened and we’re standing here saying ‘I told you so’.

It would have been much better if people had listened to us earlier on when we published the report.”

The insulation board fitted to the external of the Tower, was manufactured by Celotex, who claim that when fitted correctly it is the first PIR insulation board that can meet regulations for use on buildings above 18m (59ft) tall.

It was made of Polyisocyanurate (PIR), rigid plastic foam sandwiched between two sheets of aluminium foil that supplied in 15cm-thick boards.The PIR itself is flammable, but the aluminium foil is intended to disperse flames and prevent it catching fire.

The boards were fitted against the exterior wall of Grenfell Tower, behind the cladding that was installed to improve the appearance of the building.

The UK Charity, Building Research Establishment (BRE) was previously a former UK government establishment, that was privatised in 1997. It is the largest not-for-profit charity in the United Kingdom dedicated to research and education in the built environment.