The  Government’s Trade Union Bill will drastically cut into the facility time that Union Safety Reps currently get and will, for the first time, lump in USRs facilities with those of other union branch officials, despite it being totally separate issue as determined by the Union Safety Reps and Safety Committees Regulations 1977.

Despite representation from the TUC and evidence from their commissioned study by Bradford University, the government is deliberately attacking URS’ right for paid time off to investigate accidents and to work with employers to ensure a safe and healthy working environment.

The TUC argues that the time available to union safety reps to do this work – not classed as facilities time and protected by law – would nevertheless be hit by the government plans, despite assurances to the contrary. 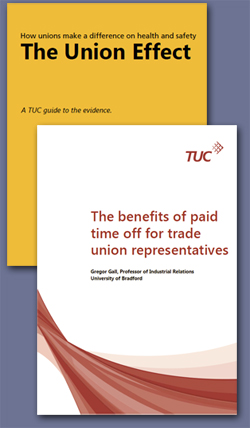 They say the Trade Union Bill cap on all time for union activities would inevitably leave unions choosing between safety and other union functions. It said this could undermine the well established ‘union safety effect’ which was evidenced in their document reported by Unionsafety in February this year.

The Government’s policy is clearly a direct attack on Union Safety Reps according to many observers and fits in with the strategy of weakening the HSE by starving it of funds, and changing it into a commercial body.

The February 2016 report for the TUC concludes every £1 spent on paid time off for public sector union reps to represent their members, taxpayers get at least £2.31 back in savings.

The government has already cut the amount of facility time available in the public sector within civil service departments and is now introducing massive changes in terms and conditions at will!

The TUC’s document entitled The Benefits Of Paid Time Off For Trade Union Representatives calculates the savings delivered by unions across the economy could exceed £1 billion every year, falling in a range between £476m and £1,250m.

Prevention of workplace injuries and work-related ill-health is the biggest single contributor to the savings, at 2014 prices the equivalent of £219m-£725m a year. The contribution of the under-threat union safety role in the public sector alone is £130m-£360m.

Both reports can be downloaded:

The Benefits Of Paid Time Off For Trade Union Representatives