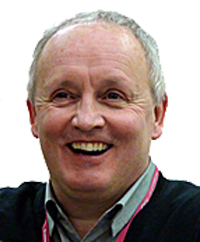 Tony Kearns, CWU DGS has written to all CWU Branches updating them on the work being done to implement Motion 29 from this year’s Conference which included the production of a report into the standing of Retired Members, including voting rights.

Concern over the delay in implementing Motion 29 carried at this year’s CWU General Conference was fully addressed in a letter sent to all Branches dated 25th October which explained to Branches the reasons for the delay in processing this matter and additionally called for Branches to submit any views they might have that they would wish the Working Group to take into consideration.

CWU HQ received only 11 responses from Branches including 2 from individuals within the same branch and 1 letter from a Regional Retired Members Committee, 12 responses in total.

In line with the terms of the motion and the LTB these submission were not replied to individually, instead they formed part of the documentation provided to the Working Group and to the NEC as follows.

As Branches will recall the motion called for a Working Group to be set up as well as a timescale for this matter to be dealt with. As stated above the issue of the original timescale was dealt with in LTB 573/17.

The Working Group met on Thursday the 9th November 2017. The participants in the meeting agreed a document that laid out the action points that needed to be taken to address the issues contained within the motion. 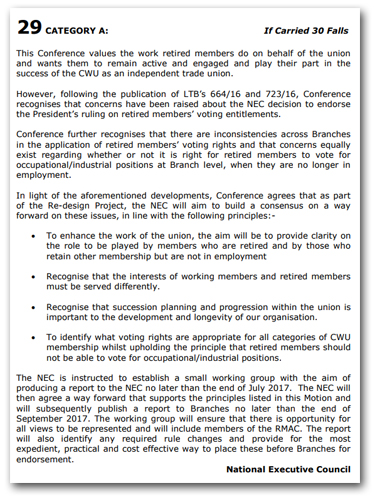 The purpose of the document was to capture the actions that the group agreed were needed to move the issues forward. It was not to record verbatim every single argument put forward for or against a particular position.

It was an action document intended to move issues on. As a reminder the main issues to be addressed were contained in the 4 bullet points within motion 29, as follows.

• To enhance the work of the union, the aim will be to provide clarity on the role to be played by members who are retired and by those who retain other membership but are not in employment.

• Recognise that the interests of working members and retired members must be served differently.

• Recognise that succession planning and progression within the union is important to the development and longevity of our organisation.

• To identify what voting rights are appropriate for all categories of CWU membership whilst upholding the principle that retired members should not be able to vote for occupational/industrial positions.

The aspiration is to follow the wider union in becoming more campaign focussed on issues for the elderly whilst identifying those areas where support can be given to other aspects of work that the Union is involved in.

Following the Working Group meeting the document was placed before the Retired Members Advisory Committee at their meeting on Tuesday the 28th November 2017, along with copies of all the submissions received. This was done to facilitate a wider discussion on the matters contained within motion 29 and for the RMAC members to express their views. The document from the Working Group was then placed before the NEC at their November meeting (Thursday 30th November 2017).

The purpose of presenting that document was to highlight to the NEC the issues under discussion as, eventually, these matters will be placed before the NEC for final decision, as per the motion itself and so are the property of the NEC.

The purpose of this LTB is to report to Branches what has taken place i.e. the Working Group has met, the RMAC has met to discuss the issue and the NEC have been documented on the matter.

Both the Working Group and the RMAC will now meet again in January to see if a consensus can be developed before finally placing this matter before the NEC in February 2018.

Branches will be aware that the wording in the motion states that “The NEC will then agree a way forward that supports the principles listed in this Motion and will subsequently publish a report to Branches”. This will happen following the February NEC.