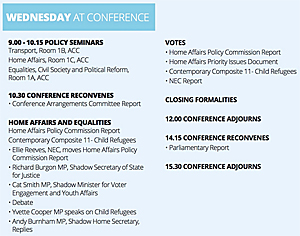 The fourth and final day of the Labour Party Conference held in Liverpool this week, has seen fervent and sometimes emotional debates being held on Home Affairs, including policy issues on Justice For Workers, Child Refugees, and on Voter Engagement and Youth Affairs.

This morning speakers and presentations were given on these key areas of Labour Party conference policy making.

Here are the main presentations of the morning session:

Andy opened his presentation by telling Conference delegates this is his tenth and last Labour Conference as an NEC member and member of the Shadow Cabinet in various forms. He hoped next year to be attending Conference as Mayor of Manchester.

In relating some of his ten year history he told delegates that the last 12 months has been the saddest of all in his time as a Labour MP over the last ten years.

He reminded conference he has been loyal to all four Labour Party leaders in all that time and said it saddened him to have to say this:

He went on to speak of the EU Referendum and said that the problem was that the EU was not working for many parts of the country. He rejected the argument that people who voted Brexit are xenophobic and racist and reminded delegates of the proud history on people in Manchester taking in refugees and immigrants from other countries.

He said we did not recognise that the EU was not working for many areas too late and we must now recognise that and ensure that leaving the EU works for everyone in the country.

Saying is farewells to conference he thanked Labour from the bottom of his heart for the support he has had during his ten years in parliament, but now it was time for him to move to new pastures and fight to ensure the voice of the North was heard loud and clear.

He closed by saying that he will always be there for the Labour Party that is still the best hope for the country, adding these final words:

"So keep the faith, keep fighting the good fight for one county not two. For a country of justice for a country where no area is forgotten, where north and south are equals. Where people who come here from around the world are welcomed as friends. Where no kid is labeled second class at age 11. Where ordinary people no longer have to plead for the truth. Where bereaved families are never put on trial. Where justice doesn’t take 27 years!

A country of justice forever Labour’s fight and the legacy we owe to those 96 lost souls!"

Admitting to conference that he was previously a lawyer, a Trade Union lawyer defending people who had been injured at work, or wrongfully dismissed.

"It’s clear that young people and future generations have been disproportionately hit by failing Tory austerity" said Cat Smith in presenting her section of the Policy Commission report debated today.

"The challenge for us Conference is how do we respond?," she asked.

Her answer was quite simple: "We need to expose the Tories for what they are. They are the party of the past. The legacy of David Cameron’s government is a nation divided. Theresa May was it’s heart and she will not unite the country. She, cannot give Britain the change we need. It is our responsibility as Labour to heal these divisions."

Calling for generational unity, she said: "It would be wrong to allow an artificial divide to be created between our younger people and older generations. We need to stand together!"

Watch, as Cat Smith, Shadow Minister for Voter Engagement and Youth Affairs speaks on her section of policy at conference:

More from today will follow, so come back soon