A stark warning has been issued to BT by the CWU stating it is resolute in its determination to defend members’ pensions in the wake of the company’s unwelcome but widely anticipated decision to trigger a review of the BT Pension Scheme (BTPS).

Tens of thousands of BTPS members across the country have were formally notified of the forthcoming review last week (20th July). 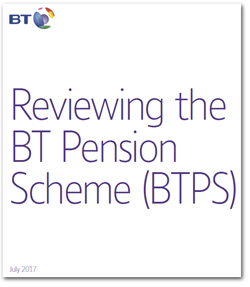 Since the announcement of the review earlier this year, the CWU has been in talks with BT about the future of the BT Pension Scheme (BTPS).

In the talks BT has set out what it believes is the case for making changes and has issued documentation which summarises the Company view.

This means that BT has not ruled out closing the Scheme for future service.

At a specially convened CWU branch forum on Wednesday of last week, during which the comapony presented its rationale for the review, Branch reps left the company in no doubt as to their anger and dismay at the move – reinforcing the warnings already issued by national negotiators that any unilateral attempt to close the scheme to future service accrual will be opposed “by all means including industrial action.”

They also signalled branches’ unequivocal determination that the forthcoming talks on the future of the BTPS must run parallel to negotiations in support of the union’s outstanding claim for significant improvements to the BTRSS – the money-purchase pension scheme that has always been the poor relation to the defined benefit BTPS which closed its doors to new members in 2001.

Clearly, this is a very serious situation and the Union has made it very clear to BT how important pensions are to our members.

The CWU view remains as follows.

CWU national negotiators are resolute in the Union’s demands for:

CWU Deputy General Secretary Andy Kerr, expressed the Union’s stance and opinion on the review by BT, when speaking at the Branch Forum meeting in London last week:

“While this review is clearly unwelcome and unsettling for BTPS members, it’s incumbent on the CWU to enter constructive discussions with the company, because ultimately it’s crucial we ensure the long-term sustainability of our members’ pensions.

We shouldn’t lose sight of the fact, however, that this review does present an opportunity for the CWU to seek to address the significant shortcomings of the BTRSS – of which around half of BT’s current UK workforce are members."

He continued onto the BTPS:

“Regarding the BTPS, the company has placed a number of options on the table. These range from the wholly unacceptable closure of the BTPS to future accrual, with in-service members switching to the BTRSS – all the way through to potential adjustments that could be made to the 2008 agreement, which can be modified by mutual consent.”

“The company has been left in no doubt that the CWU is serious about using industrial action, if necessary, to keep the BTPS open for current members – and, encouragingly, BT has stressed it is seeking to establish an agreed way forward.”

You can download and read BT’s position on it’s review of the BTPS by clicking on the cover pic above.