“We are on the verge of going back to where we were in the 1980s. The workers of this country have suffered, there’s no question about it. You think they’ve suffered so far, you’re going to get much more from this Government over the period of time!” 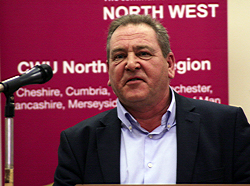 In a speech which updated the North West branches delegates listening in virtual silence, the main issues of his speech were to do with Ofcom and it’s current battering of both Royal Mail and BT.

On both issues the Union feels that they have overstepped the mark of their remit in their ongoing reviews of postal services and in particular Royal Mail, and their current threat to demand the breakup of BT.

Of course Brexit was mentioned in a 10 minute speech during which Andy managed to pack in the major issues that will continue to detrimentally affecting our lives.

But there was some good news, at least for the CWU’s North West Region Branches.

Beginning and ending his speech with plaudits for the work being done by the Regional Committee, it’s Officers and those within the branches that make up our region.

He made it clear that not only can CWU HQ rely on the support and call upon the region for action, whether it be lobbying MPs 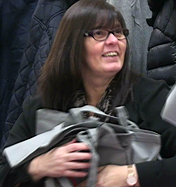 or keeping our members updated on national issues or the need for the Union to take campaigns to the streets; CWU HQ know they can rely on the North West Region to be at the forefront of any action they call upon the various regions of the country to take.

In particular, he singled out Angela Teeling, NW Regional Committee’s Assistant Secretary for the work she has done in contacting the North West MPs on the various issues we need to speak to them about.

Indeed, he said that the North West Region of the CWU is known to members of parliament, and our word means something.

Back to NW Regional AGM