Women activists, mainly from the CWU, but also from other trade unions and organisations listened to harrowing stories from pioneering women in the North West, ranging from workplace sexual harrassmenr to murder of an innocent teenage girl, to the affect on women and vulnerable people of Tory cuts and the campaigning women from the Hillsborough campaign, the Women of the Waspi campaign from Wigan, and finally, but not least one of BT’s female engineers on her experiences in what was once considered to be a male only career. 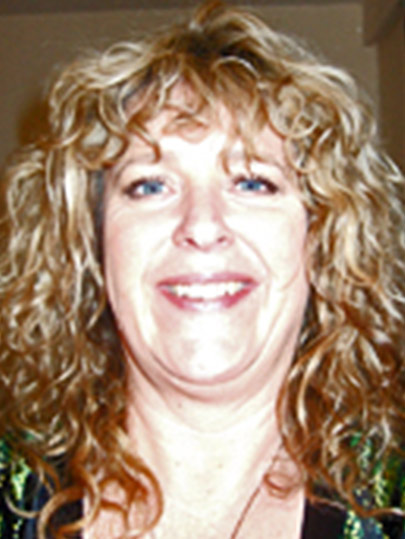 Organiser of the event, Karren Kendrick, CWU North West Regional Women’s Officer and Regional Assistant Secretary once again succeeded in producing an event that was motivational, poingniant and showcased just what women can do both collectively and as individuals; to address the prejudices and discrimination they face every day.

Karen has been active as Women’s Officer in the North West for some 11 years and is responsible for introducing the Women of Today events which have been so successful in the past, that other CWU regions are now using the format and producing similar events in their areas, with the first being in the North East in a couple of months.

Karen has
been an activist with the union since attending a 2-day CWU
Women’s Course in 2004. What she learnt there inspired her to get
more involved with the CWU.

Jean Sharrocks chaired the event as she did last year.

She started at BT 30 years ago and joined the CWU
straight away. Jean worked as a clerical assistant for 10 years.

Jean is the Secretary of the North East Regional Women’s Committee and
Chair of the North East Regional Equality Committee. For the last 5 years Jean has been a
member of and also the Chair of the CWU Women’s Advisory Committee. Jean has been
an active member of the Labour Party for well over 10 years and 6 years ago was elected
as a Labour Councillor for Middlesbrough and was re-elected 2 years ago for another 4-
year term.

As you can imagine, this tends to leave Jean with very little free time so what
time she does have, she likes to spend that time with her 18-year-old daughter and her
husband Pete.

You can read more about Karen and Jean here

Young Workers Officer for CWU Greater Mersey Amal, Elli Long was one of the 75 women who attended the event. Fellow branch member Mick Collins attended with her.

She said of the event:

”
All the speakers were very
inspirational and it was amazing to hear their stories.”

Here are pics and video coverage of the eventheld in Manchester last week:

(Click the link to a specific presentation, scroll down to read/watch everything!)

(apologies for the bad colour rendition)

Margaret’s 18-year-old son James was one of the 96 football fans who
lost their lives in the tragedy, and she has spent 28 years seeking the
truth about what happened at the Sheffield stadium.

As one of the support group’s founding members, Margaret sat on the
committee for several years, before taking on the role of Vice-Chair and
finally Chairman in 2009.

She has travelled across the UK and Ireland raising awareness and understanding of the
ongoing campaign, and sharing her experience with other families fighting their own
causes.

Her determination and drive has inspired many and in 2015 she was awarded a CBE in
the New Years’ Honours List for her tireless campaigning on behalf of the families. 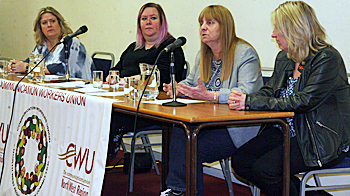 Carl stood in for Dave as he had other commitments and had to tender his apologies.

Jan Fulster and the WASPI women (Women Against
State Pension Inequality) are a campaign group
representing almost 3.8 million women born in the
1950s who have been negatively impacted by the
mismanagement of increases in their State Pension
age. 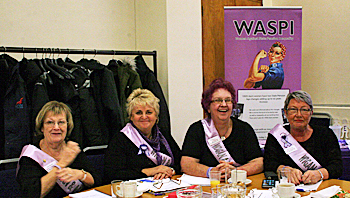 These changes were implemented by the 1995 and 2011 Pension Acts.

Their campaign is about fighting to end the financial hardship that WASPI women are facing as a result of the maladministration of these pensions changes by successive Governments.

Jan explains the history of her local group:

”
We had all met at the WASPI group in Leigh but came to realise that the location wasn’t ideal for women from Wigan and Makerfield as they had a natural bias towards Leigh.

We
knew that 8000 women in Wigan and Makerfield weren’t being reached about the injustice
of the 1995 and 2011 State Pension Acts and the two hikes in state pension age and that
we needed to do something about this. The ladies from Wigan and Makerfield looked into
the options available to us and within a fortnight the group was formed and up and
running!

We had worked closely with Councillor Pat Draper and she presented a motion on
our behalf to Wigan Council which was passed unanimously. Recently Pat has been
appointed by the leader of the Council, Lord Peter Smith to become the town’s WASPI
Champion. Together we hope to raise awareness and work with other groups to push the
government to “do the right thing!”.

Many of us are way out of our comfort zone with
appearances on TV, radio and newspaper interviews- but caring passionately about our
cause has pushed us forward!

We are grateful to union support in raising this awareness
with their members.” 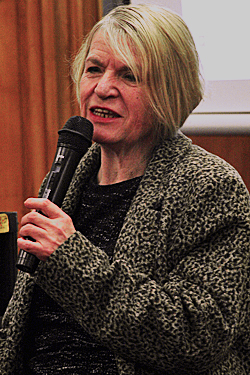 The charity’s aims are to create a lasting legacy to Sophie
through education and campaigning for the UK Hate Crime legislation to
include alternative subcultures.

Sylvia is a member of the UK Government
Cross Party Hate Crime Advisory Board and was awarded an OBE for “Community Cohesion – especially in reduction of hate crime” in 2014.

The
Charity works in schools, colleges, prisons and with young offenders
challenging the often-violent prejudice towards people from alternative subcultures to
create safer communities who celebrate, not fear difference.

Sylvia works closely with Police Authorities throughout the UK, a third of who now record“Alternative Subculture” hate crimes and incidents, delivering training and presentations.

She is a regular keynote speaker at hate crime, extremism and anti-social behaviour
conferences. Sylvia is also a guest lecturer at several universities.

The Sophie Lancaster Foundation were awarded “Upstanding Organisation of the Year
Award” at the NO2H8 Awards in October 2017.

Then there was this to start off the afternoon session: 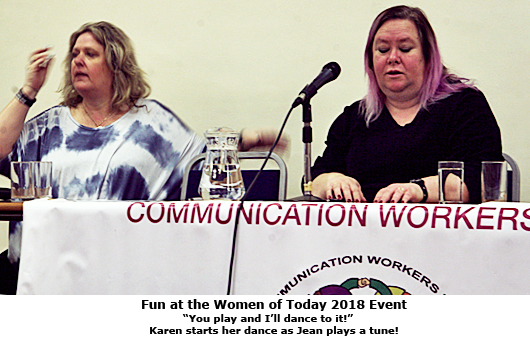 Becky works as an engineer for Openreach,
part of the BT Group, in Northwich and its
surrounding areas and Greater Manchester.

Openreach employ around 32,000 people to install,
support and maintain their network and work on
behalf of all the nation’s communications service
providers.

Openreach engineers visit around 29,500
homes and offices every weekday and manage
90,000 repairs to its copper, fibre and broadband
networks every week.

Becky started on her career path as a customer service operative for BT when she was
18, but always wanted something more hands on. She stayed at the call centre, based
in Warrington, for several years, but when the opportunity came along to become an
engineer she embraced it and started down a new track.

The life of an Openreach
engineer requires many skills including a knack for problem-solving and a wealth of
patience. This is somewhat at odds with Becky’s passion outside of her work life –
motorbikes and fast cars!

She has been a member of the CWU for almost 30 years and is known
to actively support our aims, objectives and campaigns.

Jenny is married with 4 children and 7 grandchildren.

Union activist and successful sexual harassment
campaigner joined the Labour Party Young Socialists when she was
15 years old and demonstrated against the Vietnam War and Barbara
Castles’ anti trade union bill, “In Place of strife”.

Her first job at 17 was as a telephonist for the General Post Office
(GPO). Audrey joined the Union of Postal Workers (UPW) which then
became the CWU.

Audrey worked as an international fashion buyer when she lived in Australia for 5 years
but when she returned in the 1980’s she became an active member of the Labour Party
again and joined the Transport & General Workers Union (T&GWU).

Audrey managed the fashion store ”Lady at Lord John” during a time when her staff were
sexually harassed by the area manager. Audrey defended them and was sacked.

What
followed was a bitter battle with a quarter of a million pounds injunction brought against
her, members of her family and her union. With the help of her union and local activists
Audrey won her job back and created an historic victory for women everywhere.

Glenda
Jackson played Audrey in a movie called, “Business as Usual” based
on the dispute.

Audrey was elected to the Women’s National Advisory Committee of the T&GWU
representing the North-West Region. She was also a founding member of Merseyside
Stop the War Coalition organising demonstrations and the Alturnative Turner Prize.

Audrey
re-joined the Labour Party under Jeremy Corbyn’s leadership and is active in her Unite
Community branch and Merseyside Pensioners Association. 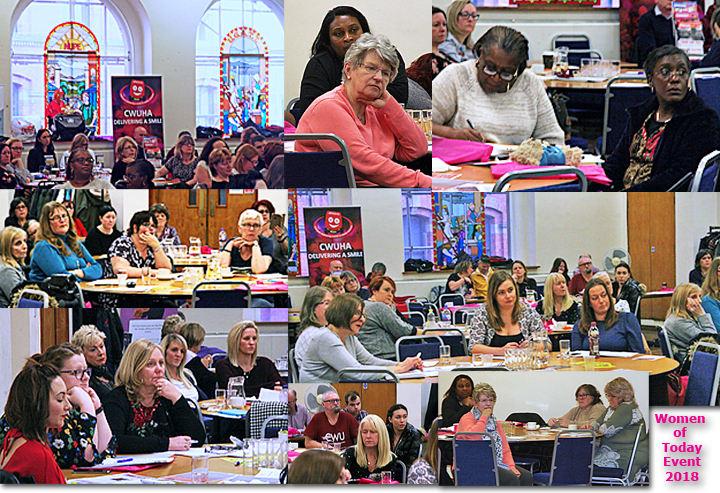 So that’s all the video footage, but we have more pics coming up – check back soon!