For the past three years the CWU’s Northwest Regional Women’s Committee (NWRWC) have hosted an event titled ‘Women of Today’.

This year’s event was held on Thursday 26th January 2017 at the Mechanics Centre in Manchester and was attended by many CWU members and other activists from across the UK.

So begins the report from North West Region’s Women’s Officer, Karen Bosson following a very successful event which saw 70 women and one or two men gather together to celebrate Women of Today.

Here Karen provides her report on the event:

The day started with tea and coffee and everyone receiving a ‘goodie bag’ from the NWRWC which included a folder with an outline of the day, information on the speakers, a feedback form, Unionline and UIA information and a few freebies.

Following an introduction by Karen Bosson, the NWRWC Secretary and the Chair of the event Jean Sharrocks of the CWU’s national Women’s Advisory Committee (WAC) the event got under way. 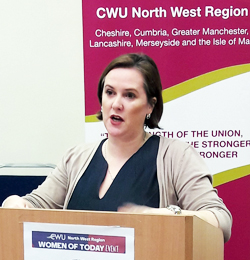 The first speaker was Carol Scheffer, a fulltime National Officer for the CWU Republic of Ireland who specialises in the area of Equality and Diversity and is also on the Executive Board of UNI Europa Global Union. Carol spoke about some of the issues currently affecting female members of the CWU ROI and gave a fascinating journey through some of the women activists who’ve played a big part in the history of the ROI’s.

One woman Carol spoke about was Baroness Constance Markievicz who was active in the Irish suffragette movement and a militant women’s organisation. She worked closely with the labour leaders, James Larkin and James Connolly and during the 1913 Dublin Lockout, worked tirelessly to provide food for the workers’ families. Two years later she helped organise and train the Irish Citizen Army. 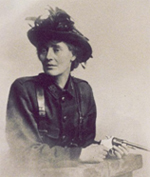 During the famous Easter Rising Markievicz was active in a fighting capacity throughout the week. Afterwards, she was the only woman to be court-martialled (4 May 1916).

In the General Election of December 1918, she became the first woman ever returned to the Commons at Westminster but as a member for Sinn Féin she did not take her seat.

She died in a Dublin hospital in 1927 and the working class people of the city of Dublin lined the streets for her funeral.

Next on the Agenda was Lynn Collins Regional Secretary of the Northwest Trade Union Congress (NWTUC) and the first woman to hold the position. 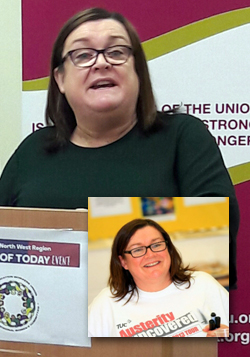 Lynn gave an overview of some of the amazing experiences she had as NWTUC Secretary including travelling the world and meeting well known people.

Lynn also encouraged all the women present to challenge themselves and take their rightful places to speak up at work, in society and in the labour movement.

Lynn’s speech regarding ‘imposter syndrome’ caused much hilarity and solidarity with women who had similar experiences.

Lynn recognised Betty Tebbs a local activist for women’s rights and a peace campaigner who had died three days earlier at the age of 98.

Betty was a lifelong union member and had been active since being a teenager when she realised that a boy she was working with at that time was paid more money than she was for the same job!

Betty had been given a People’s History Museum’s Radical Hero Award, as they viewed her as "a radical hero who worked tirelessly and with great humility to campaign for equal rights, workers’ rights and peace her whole life.” Throughout the day we all felt that we could be ‘….more like Betty’. 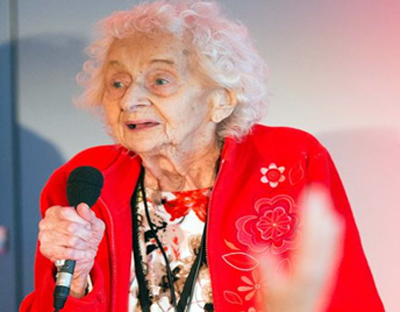 Becky Weller, a telecoms engineer with Openreach, which is part of the BT Group, was next to tell us her story about how she became an engineer and what her working life entails.

Becky explained that she had been working in one of BT’s contact centres and had been given the opportunity to change into the engineering role which had she had embraced fully as she wanted a new challenge. 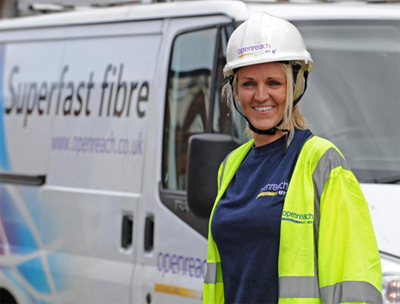 Becky had many in the room laughing at the stories she told of her days out on the road in her van and the reactions that some people had shown towards her.

Becky encouraged more girls and women to come into the industry and showed how much satisfaction she takes from being the woman that she is.

Kathy Devlin from Merseyside based organisation Beacon Counselling Trust was our next speaker who brought tears to some eyes when she told the story of her brother’s death and how it had influenced her work. 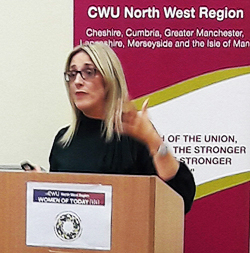 Kathy gave an overview of what areas the Trust can help with and focused on the issue of Women’s Gambling which is an area that Beacon specialise in. She gave us figures indicating that there are nearly 600,000 people currently classed as having problems with gambling in the UK and that the number of women within that is rising.

The NWRWC intend to work with Beacon to create a campaign to raise awareness of gambling issues for all CWU members.

Bexi Owen, the ‘Singing, swinging showgirl’ then talked to us about her ‘Forget Me Never’ project which was initially started with the help of crowd funding.

Bexi gave us all an easy to remember outline of how dementia affects most people and how music can be used as a therapeutic aid.

Age UK support Bexi’s initiative as they say that:

"The power of music, especially singing, to unlock memories and kickstart the grey matter is an increasingly key feature of dementia care. It seems to reach parts of the damaged brain in ways other forms of communication cannot." 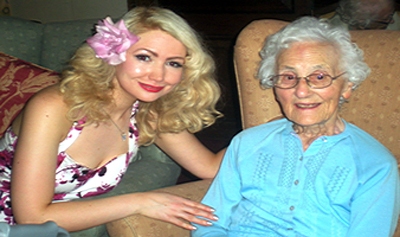 Bexi involved everyone in a sing-a-long to Que Sera Sera (whatever will be will be) which lifted everyone’s spirits before lunch.

After lunch, we welcomed the incredible Comedian and writer Francesca Martinez who had us all howling with laughter at the descriptions of her experiences and take on life. 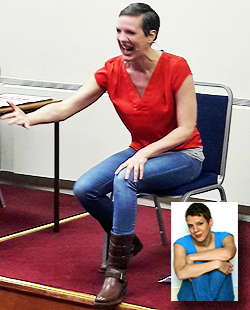 This was followed by a question and answer session where Francesca was very open and straightforward about her political beliefs and motivation.

Francesca is known to many from her younger days as a cast member of BBC1s Grange Hill and she has appeared on TV many, many times as a commentator and entertainer.

Francesca gave us the opportunity to purchase her book What The **** Is Normal?! signed copies of the book; and had photos taken with us.

She also gave her support for the CWU’s 4 Pillars campaign.

To finish off the day we had a panel discussion led by CWU national Equality Officer Linda Roy where questions were asked form the floor and the panellists answered with their own views.

Our panellists included Lisa Nandy, Labour MP for Wigan and active campaigner for issues affecting women and Lynne Morris who works for the Unison union as an Operational Manager and holds many positions in the NWTUC as well as being a highly active Labour member. 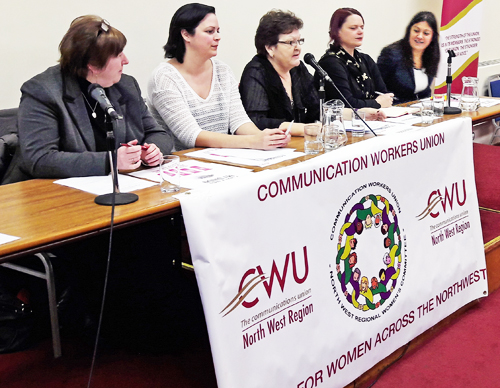 Lynne’s background is in Education and Children’s Services and she has extensive experience in the field of Educational Welfare and Child Protection.

Joining them from the CWU were Joanne Shaftoe, a Personal Assistant from BT who is on fulltime release and holds many positions within the CWU including Branch Chair, Chair of the Northeast Region and being a member of the CWU’s Telecom and Financial Sector Standing Orders Committee for CWU Conferences.

Plus Clare Drummond a Royal Mail postal worker who is a workplace Sub-rep, is her Branch’s Equality Officer, Chairs the NWRWC and sits on the Women’s Advisory Committee (WAC).

Numerous pictures were taken at the event – here is just a few: 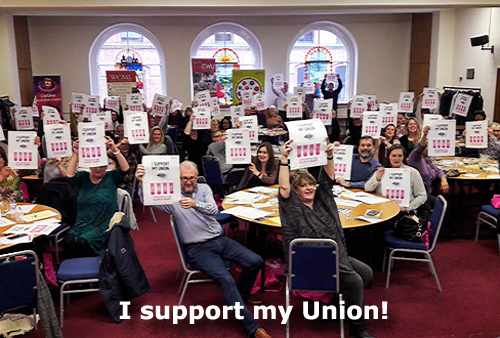 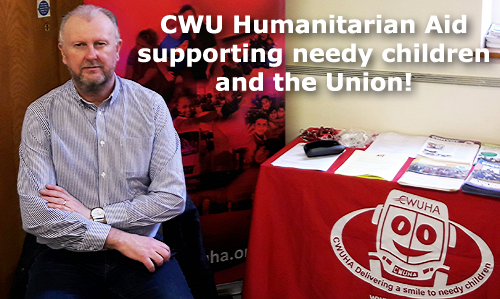 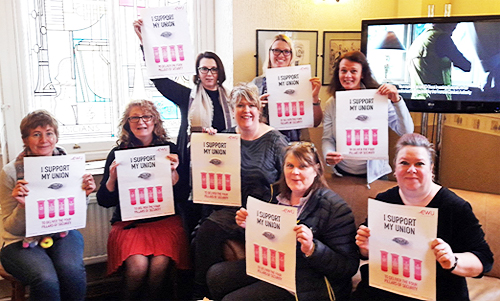 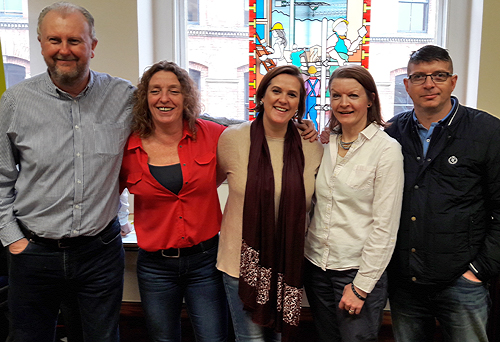