Plans are being made which could mean private companies are handed contracts of up to ten years to provide care. 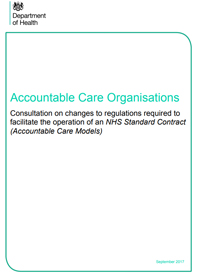 It is no coincidence that the consultation exercise on Jeremy Hunt’s latest re-organisation of the NHS closes on Sunday 5th November.

In the view of those opposing this continued and basic ‘meddling’ re-organisation of the NHS, stripping it down of assets, cutting funding and maintaining unsafe staffing levels; the aim is one of making it ready for Liam Fox’s UK/US trade deal plans for the NHS.

We will see a bonfire of the NHS as American companies wade into our healthcare system with private bids that will undercut every UK based healthcare company in order to monopolise healthcare in this country and turn the NHS into their own cash-cow!

So desperate is Theresa May for a UK/US trade deal after the country leaves the EU, she refuses to join other world leaders in condemning Donald Trump, no matter what he says or does.

Whilst the behaviour of a US President who clearly is a joke on the world stage, but a very dangerous one, and a UK PM who refuses to condemn his outrageous behaviour, and policies, continues to be part of the world’s political centre stage; the UK aligning itself with the US in terms of not only culture and business practice, does not bode well for our NHS as it is clear May will agree to anything in order to get that trade deal following Brexit.

The US healthcare companies have been eyeing up the NHS for decades, but only now are bold enough to have made it clear during the TTIP/EU talks that healthcare IS a priority for inclusion in any trade deal, and that includes the UK’s NHS.

The Tories for their part, refused totally to exclude the NHS from being part of any TTIP agreement before that was dumped by the EU. Now they refuse to say that the NHS will not be part of any future trade deal with the US. Indeed the direct opposite is true!

Within days of the EU Referendum result, both Jeremy Hunt and Liam Fox were in Washington meeting with seniror Republicans, business leaders and US Healthcare companies.

The US made it clear to the EU, that access to EU members states healthcare services by American healthcare companies; was a deal breaker and therefore it is quite obvious that UK’s NHS will be included in any UK/US trade deal.

With Simon Stevens, former head of United Health (US 6th biggest healthcare company) in Europe; now head of our NHS, the Naylor Report’s policy of selling all NHS properties including hospitals to the private sector together with the CEPs and STPs now set to strangle funding and services altogether; the NHS will not survive until the next general election scheduled for 2022!

The £9 billion per year pouring out of the NHS to private healthcare companies is set to be dwarfed by the setting up of an American – system of healthcare by Jeremy Hunt in the form of Accountable Care Systems (ACS) and Accountable Care Organisations in place of existing CCGs.

As part of his new and secret Sustainability and Transformation Plans (STP) being rushed through, along with the sale of all NHS land and properties, including of course hospitals; the end of the NHS is in the final stages before the planned introduction of medical insurance in addition to national insurance contributions and eventual sale of healthcare in the UK to the US  healthcare companies as part of a UK/US trade deal.

The ‘National’ element of the NHS is being destroyed with the setting up of localised Accountable Care Organisations that will decide how the NHS services are utilised within their area. Greater Manchester is one of the first ACOs to be set up and Hunt has stated that ALL STPs will be turned into ACS’ and then ACOs

These organisations will be private companies with no accountability to the secretary of state whatsoever, facilitated of course by the fact that the HSC Act 2012 removed the responsibility from the Secretary of State for Health to provide an NHS! This of course was a necessary change, without which the privatisation of the NHS would not be as easy.

Now it seems Liam Fox has been given free range to set up any form of proposed trade deal with the US, including giving American healthcare companies full access to the NHS, whilst Theresa May uses the old smokescreen statement that the NHS will always be "free at the point of delivery" assuming that the public won’t care who delivers healthcare as long as it is free!

Apart from the fact that the NHS is NOT at all free, as we pay for it from our national insurance contributions, the £9 billion of NHS money has gone to private healthcare companies such as Circle Health, and VirginCare. With American healthcare companies, whose costs build in 10 to 20% profit margin providing majority of NHS healthcare, owning the hospitals and land; will result in additional costs that can only be met through the American system of healthcare insurance.

Now, NHS England has outlined plans for the 44 sustainability and transformation partnerships (STPs) to evolve into ‘accountable care systems’ (ACSs), and proposes that these ACSs will become Accountable Care Organisations but only after ‘several years’. That is, until we have left the EU and signed a UK/US trade deal!

The plan is that ACOs will be separate autonomous healthcare organisations providing NHS services – in other words – private healthcare companies with no accountability to the State!

In the USA, where the ACO system has been introduced over the last few years, the key to the model is a capitated payment system under which the partners can retain any savings they achieve. Such payments are dependent on the ACO achieving numerous quality and outcome measures that incorporate patient experience, patient safety and preventative care.

According to NHS England, the contracts for this new model of care can be held by a community interest company, a limited liability company or a partnership, or by a statutory NHS provider.

In order to facilitate the easy access to the NHS by US Healthcare companies as part of a UK/US trade deal, organising our healthcare services in the same way is of paramount importance to a Tory party that has always hated the whole concept of the NHS, and incidentally the EU, because whilst we remain in the EU, our NHS healthcare system cannot be privatised and taken over by US private healthcare companies.

If these plans go through and both Liam Fox and Jeremy Hunt have their way in a future UK/US trade deal; the NHS will be totally destroyed and will never, ever be re-nationalised!

You can have your say in the form of a 38 Degree petition without having to read through the documents above. Demand full clarity in any proposals brought to change the NHS into an American system of Healthcare!