Your Mums, Sisters, Wives And Daughter’s Are Being Victimised By Austerity

Austerity is a choice of the Tory Government and indeed of the Liberal Party who formed a coalition with the Tories in 2010 and started this whole attack on working people, pitting generation against generation, gender against gender, able bodied against disabled, employed against unemployed, and those with homes against those without.

The truism in all this is of course that women are suffering far more than men as a result of austerity which is a political choice and not an economic necessity. 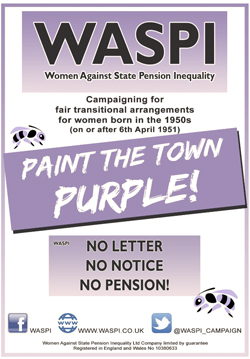 The effects on women born in the 1950s is actually tantamount to legalised theft by the state, as new pension rules target only women of a certain age, and are discriminatory.

That is the view of tens of thousands of women who now find that their state pensions are indeed worthless and ensuring many to a retirement of poverty.

* The 1995 Conservative Government’s State Pension Act included plans to increase women’s state
pension age from 60 to 65 so that it was the same as men’s.

* The changes were implemented in a discriminatory manner, totally unfair, and with no consideration to the hardships they would cause to women born in the 1950s.

* Because of the way the increases were brought in, hundreds of thousands of women born in the 1950s
(on or after 6th April 1951) have been hit particularly hard.

* Significant changes to the age women now receive their state pension have been imposed upon women with a lack of
appropriate notification, with little or no notice and much faster than they were promised – some have been hit by more than one increase.

* With no other source of income (until the 1990s many women weren’t allowed to join company pension
schemes, many are carers or in poor health) securing work is proving impossible and zero contract
hours or Job Seekers’ Allowance is the only alternative for many.

* 1950s women have been singled out for unfair and unequal treatment because of the way the increases
to our state pension age have been brought in.

* Some women have been “hit” for a SECOND time – when in 2011 further increases to Women’s state pension
age were brought in faster than the Coalition had promised – again with little or no notice to re-plan for their retirement.

* Women of a similar age have to wait disproportionately longer for their pension – a ONE year
difference in birthday can make an almost THREE year difference to state pension age. 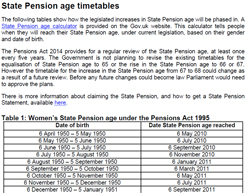 A large percentage of women only received a letter advising them of significant increases
to their State Pension Age within 1 year (i.e. when they were 59) of their expected State Pension, with a larger percentage being aged 60! Whilst many others received only 2, 3, 4 and 5 years notice.

This proves to many that a deliberate policy of discrimination took place within the DWP and to make matters worse, many women report receiving NO letter EVER!

But don’t expect the Government to show any true concerns as they refuse to believe women are facing poverty as a result of their changes to pension ages.

Indeed a perfect example of such an attitude came from the male Tory minister, Guy Opperman on the 5th July, when he who was forced to say that he would look at cases of financial hardship, immediately following his assertion that women in their 60s should take up apprenticeships and look for work!

He said that the government was “actually doing a significant amount” to address the individual difficulties of older workers trying to enter the labour market – including by offering them apprenticeships.

“The reality is over 200,000 people over 60 have entered further education since 2014/15. We have also extended apprenticeship opportunities as one of the best routes to skilled employment for people of all ages and gender."

In effect he and the Government want women of pensionable age to work until they drop! To say they are doing something about pension equality and the injustice to women and then suggest they need to get to work in their 60’s is a disgrace and an insult to women across the country.

The CWU, both nationally and within the North West Region via the Women’s Committee, and the Trade Union movement in general; support the organisation representing women’s pension rights – WASPI – Women Against State Pension Inequality; and promotes their cause, along with the website www.waspi.co.uk which provides resources of information and action that those women affected by this injustice can take to demand justice for their pension rights.

This will be by no means an easy task and that is why the website has produced legal advice and support. Complaints must be made to the DWP by those suffering the consequences of the 1995 and 2011 pension changes in such volumes that the Government is forced to look with urgency at making remedy for the “grotesque disadvantage” and financial loss inflicted upon women born in the 1950s.by the Parliamentary Ombudsman to become involved which will be the only way to get justice.

The WASPI website has a “​Guide to DWP Complaints”, produced by top London lawyers Bindmans. It takes into account all the different issues which affect women by the changes to then pension regulations and will ensure that complaints going to the DWP cover all the necessary points and will move WASPI on to a mass complaint to the Parliamentary Ombudsman, which can help women to get justice.